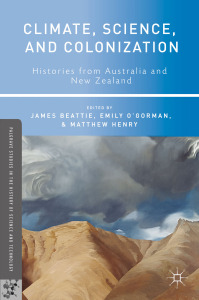 Climate, Science, and Colonization: Histories from Australia and New Zealand. Edited By James Beattie, Emily O’Gorman and Matthew Henry. Palgrave Studies in the History of Science and Technology, Palgrave Macmillan, 2014.

The blurb:
Offering important new historical understandings of human responses to climate and climate change, this cutting-edge volume explores the dynamic relationship between settlement, climate, and colonization. The contributions gathered here consider a wide range of interrelated topics, among them the use of scientific evidence in historical research, the physical impact of climate on agriculture and land development, and changing understandings of climate, including the development of “folk” and government meteorologies. They reveal Australasia to be a remarkably varied and fertile area for analyzing cultural responses to climate as well as the wider social ramifications of historical climatic events.

“This scholarly and timely book fills some important gaps in Australian and New Zealand environmental history while its truly transnational reach and interdisciplinary approach will appeal to anyone interested in climate change no matter where they live on planet Earth. It deftly bridges the gap between the Humanities and Sciences and opens up the possibility of exciting dialogue between scholars on both sides of that ‘great divide’. Written by both established and exciting new scholars, Climate, Science, and Colonization represents a significant contribution to the most important issue facing humanity by proving depth, perspective, and informed judgement on a subject all too often distorted by raw prejudice and unsupported opinion.” – Tom Brooking, Professor of History, University of Otago, New Zealand

“This compelling volume is the first to demonstrate an exceptional richness of climate and settlement narratives in Australia and New Zealand during the long nineteenth century. It bring to life contested practices of colonial settlement in un-British climates, providing a remarkable new optics to observe the amalgamation of cultural and atmospheric realities and their continuing socio-economic legacies. Stressing local scale, historical processes, and natural agency, the collection offers a historical kaleidoscope of climatological ways of life forged through encounter, exploration, and domestication of the environmental otherness.” – Vladimir Jankovic, Senior Lecturer, University of Manchester, UK